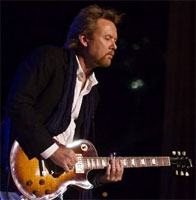 Part of a long line of Texas roots-music eclectics, Lee Roy Parnell's music was a blend of hardcore honky tonk, barroom rock & roll, blues, boogie, Western swing, blue-eyed soul, and occasional gospel. Unlike many other hard-to-pigeonhole artists, Parnell actually enjoyed a run of success on the country charts in the early '90s. He was born in Abilene, TX, on December 21, 1956, and grew up on his parents' ranch; his father had toured with a teenage Bob Wills in traveling medicine shows, and his first public performance came on Wills' radio show at age six. As a teenager, he played drums in a local band and soon picked up guitar as well, eventually concentrating on slide playing. He joined Kinky Friedman's Texas Jewboys in his late teens and moved to Austin in 1974 to join the city's budding music scene.
Parnell spent over a decade playing clubs in Austin, Houston, and Dallas/Fort Worth, honing his style and songwriting; he also married and held down a day job in radio. He moved to Nashville in 1987 and quickly landed a publishing contract and a regular spot at the famed Bluebird Café. He signed to Arista's Nashville division in 1989 and the next year released his self-titled debut album, a collection of horn-driven country-soul. It received good reviews but didn't break him commercially; that would happen with 1992's Love Without Mercy, which mostly dispensed with the horns and emphasized Parnell's slide guitar. "What Kind of Fool Do You Think I Am" and "Tender Moment" both went to number two on the country charts, and the title track also made the Top Ten. 1993's On the Road produced two more Top Tens in its title track and "I'm Holding My Own," and his duo with Ronnie Dunn (of Brooks & Dunn) on Hank Williams' "Take These Chains From My Heart" made the Top 20. 1995's We All Get Lucky Sometimes found Parnell tailoring his sound to country radio a bit more and featured duos with Trisha Yearwood, Mary Chapin Carpenter, and Tex-Mex accordionist Flaco Jimenez. It also spawned two Top Five hits in "A Little Bit of You" and "Heart's Desire." However, 1997's commercially disappointing Every Night's a Saturday Night proved to be Parnell's last new album for Arista, which issued the compilation Hits and Highways Ahead in 1999 to coincide with his departure. Parnell next wound up on the rootsy Vanguard label, debuting for them with 2001's Tell the Truth. He returned to the studio in 2006 with Back to the Well, which hit number ten on Billboard's blues chart. Parnell took a decade-plus hiatus after Back to the Well, finally returning to action in August 2017 with Midnight Believer.