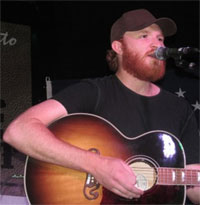 Country singer and songwriter Eric Paslay was born in 1983 in Abilene, Texas, growing up in Temple, Texas, where his grandfather and his grandfather's brothers had a local band called Arnold Schiller & the Moonlight Serenaders. Paslay was playing guitar by the time he was 15 years old, and began writing songs at the same time, relocating to Nashville a couple of years after he graduated from high school to attend Middle Tennessee State University, where he studied everything related to the music business. He got an internship with Cal4 Entertainment during his senior year, which led to a song publishing deal, which in turn led to a recording contract with EMI Records Nashville in 2011, the same year a song Paslay had written, "Barefoot Blue Jean Night," became a number one country hit for Jake Owen. Paslay's debut single, "Never Really Wanted," also appeared in 2011, with a second single, "If the Fish Don't Bite," arriving a year later in 2012, and "Friday Night" in 2013. An eponymous debut album produced by Marshall Altman appeared early in 2014. The debut reached four on the Billboard country charts, supported by the hit singles "Friday Night" (which peaked at six), "Song About a Girl," and "She Don't Love You." "High Class," the first single from his second album, saw release in 2015.