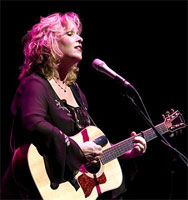 Known as a writer of intelligent and introspective songs in the country/folk/pop vein, Gretchen Peters achieved renown through country stars covering her material. Among the artists to have hits with her songs were Trisha Yearwood, Pam Tillis, George Strait, Martina McBride, and Patty Loveless. Peters was born in Westchester County, New York, and lived there until her parents divorced when she was eight, at which point she moved with her mother to Boulder, Colorado, where, as a teenager, she wrote songs and performed in the town's thriving live music scene. She moved to Nashville in 1988 and signed several writing deals before moving to Sony in 1992. Having written a string of critically acclaimed hits, Peters received her first Grammy nomination for Song of the Year in 1995 for "Independence Day" (recorded by McBride), her powerful anthem about a women who fights back against an abusive husband. At the Country Music Awards that year, the song took home the same award, as well as a CMA Video of the Year in 1994. She was nominated again for a Song of the Year Grammy in 1996 with the Loveless chart-topper "You Don't Even Know Who I Am." Peters' scope wasn't limited to the country music arena, as she demonstrated by co-writing "Rock Steady" with rock artist Bryan Adams -- a song that appeared on Bonnie Raitt's Road Tested. Peters released her debut album, The Secret of Life, on Imprint Records in 1996. Her self-titled sophomore effort was issued five years later. The impressive Burnt Toast & Offerings appeared in 2007. She released a seasonal offering called Northern Lights, which featured non-traditional material of her own as well as covers. In 2009, she collaborated with Tom Russell on One to the Heart, One to the Head, and released a best-of collection entitled Circus Girl -- all while touring incessantly. 2011 saw the release of the live DVD Wine, Women and Song with pals Suzy Bogguss and Matraca Berg. Peters released a studio album of her own new material in January, 2012 entitled Hello Cruel World.
In October of 2014, Peters was inducted into the Nashville Songwriter's Hall of Fame. In February of 2015, she released Blackbirds, an album of new material co-produced with guitarist Doug Lancio and keyboardist Barry Walsh. Issued on her Scarlet Letter Records label, it featured guest appearances from Jerry Douglas, Jason Isbell, Kim Richey, Jimmy LaFave, and Suzy Bogguss.