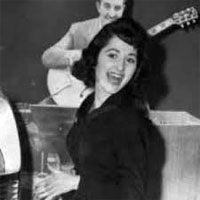 Janice Peters played a small but fiery part in British rock 'n roll's early history. A brunette with a beguiling smile, she was signed to EMI's Columbia label in 1958 and cut the Brenda Lee-styled "This Little Girl's Gone Rockin'," backed with the less interesting "Kiss Cha Cha." In 1959, she recorded with Shadows co-founder and songwriter Iam Samwell, cutting Samwell's "A Girl Likes," a piece of high-energy rockabilly that almost crossed over into Lene Lovich-style punk with its frantic pacing and Peters' vocal acrobatics.
Peters at her best was too American to succeed in England. She disappeared from the recording scene early on, leaving behind a handful of eminently listenable songs.