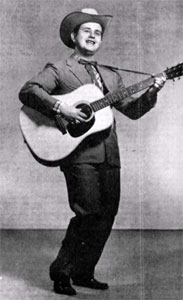 Earl Peterson was a native son of Paxton, Illinois, but before he was two years old, his parents moved to Michigan. He developed a love for music early on - started playing the guitar when he was just two years old, then took up the drums when he was 14. As a teen-ager, he would entertain the folks at local dances and get togethers.
His first radio show was at radio station WOAP out of Owosso, Michigan where he was on the air daily.
After high school, Earl started off on a college course in law, but he decided to turn to his music instead. In the middle of 1950, Earl and his band, the Sons of the Golden West, were doing two shows a day over WFYC in Alma, Michigan. The first show aired from 6:45am to 7:00am; the second program aired from 11:30am to 12:00noon.
He had a unique recording contract affiliation for a time. The label was the Nugget label and it was owned by his mother and himself. A 1950 article indicated he had released a couple of his tunes on the label, "The Michigan Waltz" and "Take Me Back To Michigan".
In 1955, Earl and his band were working at WCEN in Mt. Pleasant, Michigan. There, he had a 7:00am show called "Melody Trails". Then at 7:00pm every night, he had a show called "Country Junction". He worked pretty much full time for the station. In addition to the two shows, he was also the Farm Editor, Talent Director and Staff anouncer for the station. He co-owned the Bass Lake Pavillion with his mother, Mrs. Pearl Lewis, where he and the band played each Saturday night. During this time, Earl had signed on with Columbia Records.