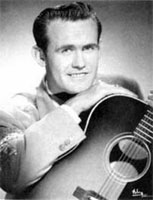 born William Clarence Phillips, 28 January 1936, Canton, North Carolina, USA. Phillips grew up in an area steeped in country music and learned guitar and began singing before leaving high school to work as an upholsterer. In 1955, he joined the Old Southern Jamboree on WMIL Miami and sang at local clubs, before moving to Nashville in 1957. He joined Cedarwood Publishing as a songwriter and soon gained attention when he penned Webb Pierce's 1958 Top 10 country hit ‘Falling Back To You’. This success saw Phillips signed to Columbia Records and in 1959 and 1960, he registered his first two Top 30 hits with ‘Sawmill’ and ‘Georgia Town Blues’, both with Mel Tillis, and he appeared on the Grand Ole Opry. He joined Decca Records in 1963 and by 1971, had registered 12 more hits, the biggest being ‘Put It Off Until Tomorrow’ (1966) which, with Dolly Parton (the song’s co-writer) on harmony vocal, reached number 6. Other Top 10s included ‘The Company You Keep’ (1966), ‘The Words I’m Gonna Have To Eat’ and ‘Little Boy Sad’ (1969), the latter having previously been a 1961 pop hit for Johnny Burnette. During the 70s, he registered five more minor hits, when recording on the United Artists or Soundwaves label. From the early 70s, he began to work as part of the Kitty Wells - Johnny Wright Show, although continuing to make a few recordings as a solo artist. In 1995, he suffered a stroke and Wells, Wright and other country music friends played a charity show to raise money for him.