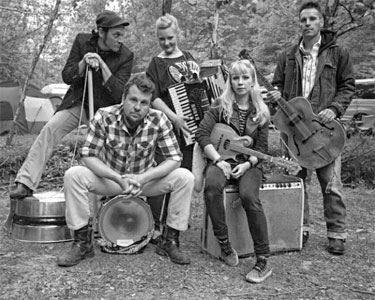 Taking inspiration from roots music and Southern tales of the supernatural, the Pine Hill Haints play a self-described style of "Alabama ghost country" that touches upon honky tonk, rockabilly, folk, and bluegrass. As a child, Jamie Barrier (Vocalss, guitar) often joined his grandfather in attending local hootenannies, where he was exposed to the musical traditions of his native Alabama. Later, Barrier honed his own voice by singing in a graveyard — the Pine Hill Cemetery — and formed the raucous rockabilly outfit the Wednesdays while still in elementary school. The Wednesdays would go on to release several albums in the 2000s, but Barrier nevertheless formed the Pine Hill Haints in 1998 as a second (and considerably different) project, piecing together a revolving lineup that ultimately solidified around core members Matt Bakula (washtub bass, banjo), Ben Rhyne (snare drum), and Jamie's wife, Katie Barrier (washboard, mandolin). The band issued its earliest recordings (three full-lengths, a 12" vinyl, and several split albums) on Barrier's own Arkam Records before attracting attention from K Records' founder Calvin Johnson, who recorded the band's next release — You Bury Your Hate in a Shallow Grave — for free. The disc was released on Portland's LELP label, as was the band's follow-up EP, Pine Hill Haints Meet Clampitt, Gaddis & Buck. While the Pine Hill Haints retreated back to Arkam for 2005's Those Who Wander, they were subsequently picked up by K Records and released Ghost Dance, an eclectic album of 20 lo-fi songs, in November 2007.
One year later, the band retreated to Florence, Alabama, to record at the Black Owl Trading Co. The resulting record, To Win or to Lose, marked the Haints' second release for K Records in summer 2009. The band continued their prolific streak, working on more albums for K with 2011's Welcome to the Midnight Opry and 2014's The Magik Sounds of the Pine Hill Haints, along with various lesser releases in the years between. More touring also ensued, including a run through Japan scheduled for the fall of 2014.