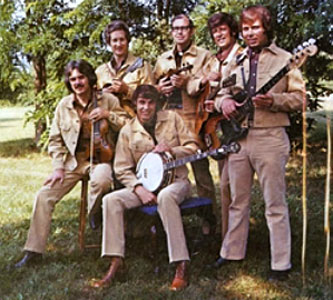 "If I Should Wander Back Tonight" could be the theme song of any road warrior and it certainly describes the Pinnacle Boys, a hearty bluegrass outfit that not only toured extensively, but filled bluegrass record bins as well. The band has been described as both a bluegrass supergroup and the creators of a kind of bluegrass techno, in which the individual personalities of players is secondary to teeth-gnashing group dynamics. No wonder the band's cuts are popular on compilations such as The Banjos That Destroyed the World, although the Pinnacle Boys also came up with numbers that were off the rural route entirely, the best example of which is the oddball "Latin Leprechaun." The group was based out of Knoxville, a town with a history of residents who were pioneers of country and bluegrass music.
The Pinnacle Boys was one of two Knoxville bands in the '70s that were considered among the best in the current bluegrass crop, the other being the Knoxville Grass. Yet the actual lineup in either band on a given day could change whimsically, the comings and goings of various star sidemen in these and every other bluegrass band in the Appalachian area too complicated for anyone to follow aside from a forensics detective. At the height of the Pinnacle Boys popularity, the frontman was Bud Brewster, one of two Brewster Brothers who had backed up country legend Carl Story. Banjo picker Larry Mathis had been lodged close by in the record section with the the Bailey Brothers, while other bandmembers had already cut records of their own for labels such as County and Atteiram. There was something at the heart of the group's music other than flashy virtuosity, perhaps a bit of their hometown's sentimental old-time music atmosphere, and this came through whenever the group harmonized on a Louvin Brothers tune. Or perhaps it is better to say it almost always came through, as was the opposite case when the group attempted its breakthrough to the mainstream audience with a mid-'70s Rounder album. The label somehow managed to smooth much of the excitement out of a twin fiddle lineup featuring both Randall Collins and Jerry Moore, and the record got a pretty weak response.