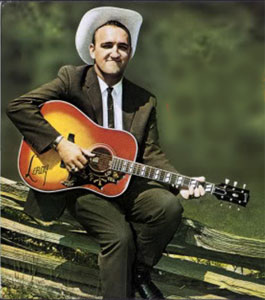 Leroy Pullins is pretty much the definition of a novelty one-hit wonder -- a singer who patterned himself after Roger Miller, a move that resulted in one moderately big country hit, "I'm a Nut," in 1966, and a host of other, similar tunes in the next few years, but few other hits. Not much is known of Leroy Pullins' life and career -- all information comes from Colin Escott's liner notes for Bear Family's 2007 CD I'm a Nut, a collection that contains all existing Pullins sides and credits a 1984 obituary written by Valarie Honeycutt for the Lexington Herald Leader. Pullins was born Carl Leroy Pullins on May 12, 1940, in Berea, KY. He began pursuing a musical career in his teens, assembling a rock & roll band called the LeSabres when he was 19. Once the group fell apart, Pullins moved to Nashville, where he was signed to Kapp Records, a subsidiary of Decca, in 1966. He was signed with the idea that he would capitalize on Roger Miller's success, which he did quite successfully with his first single, "I'm a Nut," an original tune that went all the way to 18 on the country charts. A full album also arrived in 1966, with a second arriving the next year, but that album and its accompanying singles went nowhere. As success started to dry up, so did Pullins' writing, so he decided to retire from the music business, moving back to his hometown of Berea where he became a fireman. He stayed there until his death from a heart attack in May 1984 at the age of 44. A few months later, Bear Family issued an LP called I'm a Nut (this was not a deliberately posthumous release; it was planned before his death), and that was the only Pullins release in circulation for years until Bear Family issued a different compilation, also called I'm a Nut, in 2007.