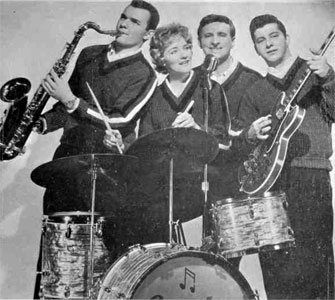 This instrumental rock quartet from Connecticut, USA featured lead guitarist Vincent Bell Lee (b. Gambella), female drummer and singer Claire Lane, her brother tenor saxophonist Richard and their cousin, guitarist Eugene Moore. The family group was formed in 1956 by Claire, who had originally played in the C&W group, Gino And The Homesteaders. Lee, who as a soloist had previously recorded a rock version of the cowboy song ‘Mule Train’, helped music student Claire arrange the old Vaughn Monroe 1949 million-seller ‘(Ghost) Riders in The Sky’. They gave this old cowboy song a Duane Eddy -ish treatment, complete with cattle noises and various special effects. The record, which they placed with Amy, went into the UK Top 10 and made the US Top 40 in 1961. The group’s follow-up ‘Take Me Back My Boots & Saddles’ and ‘The Cry Of The Wild Goose’, by Lee with another group, the Challengers, both failed to click. Lee later became an in-demand session man and also recorded solo on Verve Records, Musicor and Decca Records where his version of ‘Airport Theme’ in 1970 sold a million copies worldwide.