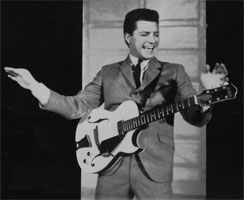 Teddy Randazzo was never quite as visible as other New York-spawned rock 'n' roll talent of the 1950's — to name a few, Dion was more of a star and for a lot longer, and the various members of Jay & The Americans enjoyed hits right to the outset of the 1970's. But Randazzo had his day in the sun as a singer, and he also wrote hundreds of songs, and saw many dozens of recordings of the best of his work. Born in Brooklyn in 1937, he was lucky enough to grow up in a musical family, and by 15 was a good enough accordion player to turn professional, as a member of the group the Three Chuckles, who were in the market for a new keyboardman and singer — the singing took a little time to develop, with help from his decade-older fellow group members Tommy Romano and Russ Gilberto, but when the group started recording, it was the sides that Randazzo sang on that initially hit, and by 1955, at 17, he was the frontman for the group. They had a number one hit with "And The Angels Sing", which had a rocking beat and brought them to the attention of deejay Alan Freed, who put the group into his first jukebox movie, Rock, Rock, Rock (shot in New York, in the Bronx, actually), but also gave Randazzo a solo spot.When the smoke cleared from the movie, Randazzo had decided to go solo. He continued recording for Vik Records, a unit of RCA Victor, and enjoyed a minor success in 1958 with "Little Serenade", and made an appearance in Freed's next movie, Mister Rock And Roll, as well as in the 20th Century-Fox CinemaScope color production The Girl Can't Help It, among other movies. By 1960, he'd moved to ABC-Paramount, where he had another minor hit with "The Way Of A Clown", and in 1963 he had another small hit with "Big Wide World" on the Colpix label. But it was mostly as a songwriter and producer that Randazzo busied himself and made his real success in the music business; he wrote some 650 songs over the ensuing decades, and saw them recorded by the likes of Frank Sinatra and Dionne Warwick. "Pretty Blue Eyes", authored with Bob Weinstein, was a number one hit for Steve Lawrence. But it was with Little Anthony & The Imperials that he had his longest success — in addition to producing the group, he authored "Going Out Of My Head", "I'm On The Outside Looking In", and "Hurt So Bad" (later covered by Linda Ronstadt), among other hits.Randazzo became less visible as the 1960's wore on, and in the 1970's was largely forgotten by all except oldies fans. He remained active as a songwriter and behind-the-scenes, and did the occasional live performance to keep his hand in, but by then he was earning a good income from his annual royalties. He busied himself in local production in both Florida and Hawaii, especially the latter, and reportedly enjoyed a very happy second marriage — his son from his first marriage, Teddy Randazzo Jr., has also had a successful music career. Randazzo died in his sleep in 2003.