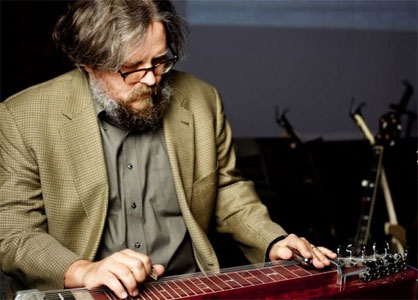 Since his appearance on the alt-country scene with the Grievous Angels in the mid-'90s, Jon Rauhouse has become Bloodshot Records' secret weapon multi-instrumentalist, appearing on more than a dozen of their releases, as well as guesting on albums for other labels. Growing up in Arizona, Rauhouse began playing banjo on a dare from a high school classmate, the two of them ending up in a bluegrass band called Southwind. Rauhouse played in Southwind for seven years, switching to pedal steel guitar after two years on banjo. After Southwind, Rauhouse spent nearly a decade as a sideman in the Phoenix area, playing with every band he could. He ended up in the Grievous Angels, who got a deal with Bloodshot and released two albums and an EP. When the Grievous Angels reached the end of the road, Rauhouse had a short-lived project called Sleepwalker with Jamal Ruhe, then found steady work recording and touring with Sally Timms, Kelly Hogan, and Neko Case. While on tour with Neko Case, Rauhouse ran into Tommy Connell, a former member of Southwind. When the time came for Rauhouse to record a solo album, he enlisted his old friend Connell, as well as players from the Bloodshot stable, to record Jon Rauhouse's Steel Guitar Air Show, a fun collection of (mostly) instrumentals in the spirit of Speedy West & Jimmy Bryant, covering a range of styles from Western swing to Hawaiian that was released in 2002. Rauhouse assembled essentially the same crew for the follow-up, Steel Guitar Rodeo, in 2004. Hawaiian Guitar Expedition arrived in 2005, followed by Steel Guitar Heart Attack in 2007.