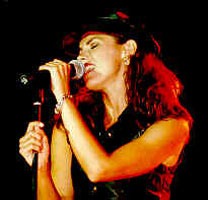 Singer/songwriter Ronna Reeves spent most of her life in the music industry and was one of the more promising female singers to emerge in the 1990s. She was raised in Big Spring, TX, and began singing along with the radio and phonograph at age six. She won the Little Miss Big Spring competition at age eight; the judges' enthusiastic reaction to her singing in the show's talent segment inspired her parents to take her to a local guitar/fiddle teacher to evaluate her abilities, and he ended up adding Reeves to his band. By age 11, she had her own group, which played in Fort Worth nightclubs. There she met Ron and Joy Cotton, two promoters working out of Waco. A few years later, when she was 17, the Cottons invited her to open for his client George Strait, a gig she performed for the next 18 months. She went on to open for Ronnie Milsap, Randy Travis, Garth Brooks, the Judds, and Reba McEntire, among others. Her 1991 debut album, Only the Heart, was released with little notice. Her second album, The More I Learn, produced three minor hits, including "The More I Learn (The Less I Understand About Love)." What Comes Naturally (1993), although receiving critical praise, failed to produce any chart hits.
Reeves returned in 1995 with a new label (River North Records) and a new album, After the Dance. Her exposure had also been raised, thanks to a chance touring and recording turn with adult contemporary crooner Peter Cetera. That same year, she and Cetera scored a minor hit with a soft-focus cover of the ABBA hit "S.O.S.". (The song appeared on Cetera's 1995 album One Clear Voice.) The collaboration proved to be fruitful, as Cetera helmed the production of Reeves' next album, 1998's Day 14. Instead of country, the album was a collection of straight-ahead rock and pop.