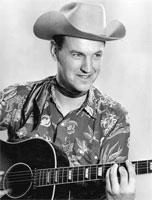 Canadian, six feet one, genial Donn Reynolds, "King of the Yodelers", was born in western Canada June 26, 1921.
At the age of 10, he picked up his first guitar, and by 14, he turned professional as "The Yodeling Ranger". It was the beginning of a long prosperous career that was to bring Donn world renown for his style and presentation of the western song.
Donn is the former International Yodel Champion, winning the title at the Pacific National Exhibition in 1950. In 1956 he won the United States Yodeling Championship in Washington DC, claiming the title "World's Champion Yodeler".
A star of song and screen, Donn performed on countless stages and television shows worldwide including the Grand Ole Opry, Louisiana Hayride, WLS National Barn Dance, and the WWVA Jamboree. He released many recordings on MGM, Columbia, and RCA labels including several worldwide hit singles.
A star of song and screen, Donn performed on countless stages and television shows worldwide releasing many recordings on M.G.M, Columbia, and RCA labels including several worldwide hit singles.
His friends include the likes of Hank Snow, Peggy Lee, Roy Rogers, Marty Robbins, Ray Price, Roy Clark, and Buck Owens. His acting credits include the films Eureka Stockade (1949), She Wore A Yellow Ribbon (1949), Arena (1953), and the lead role as Davy Crockett in the British musical.
Though Donn, for most of his career, was a solo performer, he teamed up in the latter years with his wife Cindy as a husband and wife duo. The couple commenced a worldwide tour together including performances throughout England, Europe and the Middle East. They appeared in the United States and across Canada on many popular TV shows, performed before royalty, and played almost every major night club in Canada from coast to coast.
In 1978 Donn set the world record for the longest yodel by yodeling non-stop for 7 hours and 29 minutes. In 1984 he established the world record for the fastest yodel by achieving five tones (three falsetto) in 1.9 seconds. These achievements earned him fame in both the Guinness Book of World Records and Ripley's Believe It or Not!
Donn passed away August 16, 1997, following complications from Alzheimer's Disease.