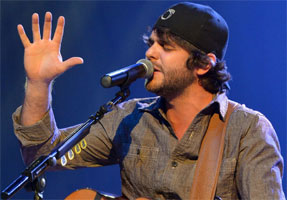 Georgia-born singer/songwriter Thomas Rhett, the son of award-winning country crooner Rhett Akins,, didn't seriously start considering following in his father's footsteps until his senior year in high school. Raised on a steady diet of Merle Haggard, Hank Williams, Led Zeppelin, and the Rolling Stones, Rhett inked a publishing deal with EMI just two years into his college career, and landed a song ("I Ain't Ready to Quit") on fellow country-rocker Jason Aldean's 2010 release, My Kind of Party. Like Aldean, Brantley Gilbert, and Justin Moore, Rhett splits the difference between slick contemporary country and rowdy good-time rock & roll, an equation he put to the test on his 2011 debut single, "Something to Do with My Hands." A self-titled EP appeared early in 2013, and later that year his debut full-length, It Goes Like This, arrived. The album reached number six on the Billboard 200 and the Top 30 in Canada on the strength of the Top Ten Country hit singles "It Goes Like This," "Get Me Some of That," and "Make Me Wanna," all of which topped Billboard's Country Airplay chart.
Led by the single "Crash and Burn," which reached number one on Billboard's Country Airplay chart and number two on the Hot Country chart, Rhett's sophomore album, Tangled Up, appeared in September 2015. A second number one smash, "Die a Happy Man," and third single, "T-Shirt," helped turn Tangled Up into a big hit that stayed on the charts into 2016. That year, a deluxe edition of the album appeared, featuring the single "Star of the Show," which went into the Top Ten as well. In 2017, Rhett returned with his third studio-album, Life Changes, which included the single, "Craving You," featuring Maren Morris. The album topped both the Billboard 200 and Top Country Albums charts. "Look What God Gave Her" followed in 2019 as the lead-off single to the full-length Center Point Road.