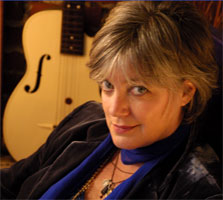 The singing career of Wichita Falls, TX, native Kimmie Rhodes kicked off at the age of six, when she first performed with her family gospel trio. During her teens she began learning guitar and writing songs, and in 1979 moved to Austin, where she met her future husband and producer Joe Gracey. Two years later, Rhodes released her debut LP, Kimmie Rhodes and the Jackalope Brothers, followed in 1985 by her second effort, Man in the Moon. She recorded her third album, 1989's Angels Get the Blues, at Sun Studios in Memphis. While commercial success continually eluded Rhodes, her music proved popular with other performers; her song "I Just Drove By" was covered by Wynonna on the Tell Me Why album, and the duo pairing of Trisha Yearwood and Willie Nelson recorded "Hard Promises to Keep" for Yearwood's The Song Remembers When. Rhodes herself also cut a pair of duos with Nelson for his Just One Love LP; Nelson returned the favor for Rhodes' 1996 effort West Texas Heaven, on which she also teamed with Waylon Jennings and Townes Van Zandt. Rich From the Journey followed in the spring of 2000. Love Me Like a Song, Rhodes’ sixth album, was released in 2002. The following year, she teamed up with Willie Nelson for the duo album Picture in a Frame. 2004’s Lost & Found was a collection of previously unreleased recordings recorded between 1996 and 2003. Rhodes’ 2005 album Windblown doubled as the soundtrack for a performance-art piece that debuted in January 2005. Similarly, 2006’s Small Town Girl featured songs from Rhodes’ stage musical of the same name. She followed it with her 2008 release, Walls Fall Down.