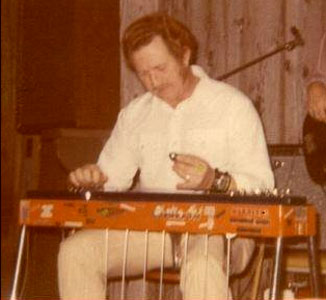 Red Rhodes was one of the most versatile steel guitarists in country music. Born Orville J. Rhodes in East Alston, IL, his mother taught him to play the dobro when he was only five; at 15, he switched to the lap steel guitar, using a homemade stand. He played his first professional gig alongside his stepfather before moving to L.A. in 1960 to do session work. Eight years later, he was one of the most in-demand sessionmen on the West Coast and played with artists like the Byrds. Rhodes and his band played at the Palomino in L.A. during the late '60s and worked on various Michael Nesmith sessions, which led to occassional work as a steel player for the Monkees. He remained with Nesmith through both incarnations of the group, and continued his session work throughout the '70s, appearing with James Taylor, John Phillips, the Carpenters, Carole King, Chilli Willi & the Red Hot Peppers, and Seals & Crofts. He has released a few solo albums, including Red Rhodes' Steel Guitar (1979) and Fantastic Steel Guitar (1980). Rhodes' playing was limited in the '80s and early '90s by the rheumatoid arthritis that affected the use of his hands. He devoted his time instead to his amp shop, occasionally making appearances at the International Steel Guitar Festival. In 1995, he played on Nesmith's Tropical Campfires album and toured with him. Shortly after he completed the tour, he fell ill, succumbing to interstitial lung fibrosis on August 20, 1995.