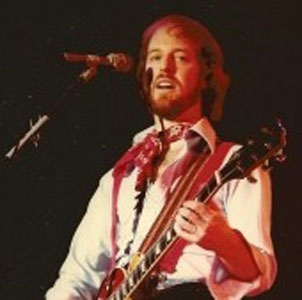 A slide guitarist and former member of the Detroit blues-rock band the Rockets, Dennis Robbins also performed with the country-songwriter supergroup Billy Hill; among the songs he wrote were Garth Brooks' "Two of a Kind, Workin' on a Full House" and Shenandoah's "Church on Cumberland Road." Robbins was born in Hazelwood, North Carolina, and grew up listening to traditional bluegrass music as well as rock & roll music. He began playing different styles of guitar music as a teen. Following high school, Robbins was a U.S. Marine, and eventually moved to Detroit, where he played in different bands before joining up with the Rockets as a slide guitar player. The band was quite popular and opened for the likes of ZZ Top, Kiss, and Bob Seger. Tiring of touring, Robbins returned to North Carolina and then moved to Nashville, where in 1986 he released his debut solo album The First of Me. His lack of success spurred Robbins to form Billy Hill, which broke up in 1990 after only one album. Soon afterward, he became the first country artist to sign to Giant's new country division. His first single for the label, "Home Sweet Home," became a minor hit, and later appeared on the album Man with the Plan (1992).