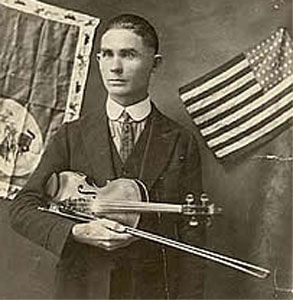 Robertson was born in Arkansas and grew up on a farm in the Texas panhandle where his family moved when he was three years old. His father, grandfather and uncles were fiddlers who competed in local contests. His father, a veteran of the Civil War, was also a farmer, and later quit fiddling to become a preacher. At the age of five, Robertson began learning to play the fiddle, and later learned banjo and guitar. In 1904, at the age of sixteen, he decided to become a professional musician and left home to travel with a medicine show through Indian Territory. In 1906 he married and settled in Vernon, Texas and became a piano tuner for the Total Line Music Company.
Robertson and his wife Nettie performed at silent movie theaters and fiddling contests through the region. As the son of a Confederate veteran, Robertson was able to attend the annual Old Confederate Soldiers' Reunions across the South, and became a regular performer at these events. He met 74-year-old fiddler Henry C. Gilliland at one of these reunions, and the two began performing together. After the Richmond, Virginia reunion in June 1922, Gilliland and Robertson traveled to New York City, auditioned for and received a recording contract with the Victor Talking Machine Company. On Friday, June 30, 1922, Robertson and Gilliland recorded four fiddle duos for Victor. These probably represent the first commercial recordings of country music performers. Two of them, "Arkansaw Traveler" and "Turkey in the Straw", were released on Victor. Two others, "Forked Deer" and "Apple Blossom", were never issued. At the company's request, Robertson returned the next day, July 1, without Gilliland and recorded six additional sides. Four of them - "Sally Gooden", "Ragtime Annie", "Sally Johnson/Billy in the Low Ground" and "Done Gone" - were released on Victor over the next two years. The other two, "General Logan Reel/Dominion Hornpipe" and "Brilliancy and Cheatum", remain unissued. Robertson's rendition of "Sally Gooden" showcased his ability to interpret one melody with several variations.
Robertson's first record, with his solo "Sally Gooden" on one side and duo "Arkansaw Traveler" on the other, was released on September 1, 1922, but was not widely circulated until the spring of 1923. Sales figures are not known, but Victor did not promote the record strongly. His next two records were released in 1923 and 1924, but only after the summer of 1923, when Fiddlin' John Carson's recordings on Okeh Records kicked off a boom in old-time country music record sales. In 1925, Victor started using a new electrical recording process, and let Robertson's 1922 acoustically made recordings go out of print.
Robertson approached Victor about recording again, and in 1929 arranged to meet a Victor field recording engineer in Dallas, Texas. This time he included his wife Nettie on guitar, his daughter Daphne on tenor guitar and his son Dueron on tenor banjo. On August 12, 1929 the group recorded four fiddle tunes - "Texas Wagoner", "There's a Brown Skin Gal Down the Road", "Amarillo Waltz" and "Brown Kelly Waltz". On October 10, the Robertson family band returned to Dallas and recorded two fiddle duos with Texas fiddler J. B. Cranfill, "Great Big Taters" and "Run Boy Run". Two additional tunes were recorded that evening, "Apple Blossom" and "My Frog Ain't Got No Blues", but were not issued. The next day, October 11, the band recorded "Brilliancy Medley", released in September 1930, and the ballad "The Island Unknown", released in December 1929. That day the band also recorded three additional sides that were not released - "My Experience on the Ranch" and remakes of "Arkansaw Traveler" and "Sally Gooden".
The week of September 20, 1940, Robertson recorded 100 fiddle tunes at Jack Sellers Studios in Dallas, Texas. Unfortunately, there is no song listing from these sessions, and none of the tunes have ever surfaced.
Robertson continued to perform extensively at dances, theaters, fiddlers' conventions and on radio. In 1963, John Cohen, Mike Seeger and Tracy Schwarz visited Robertson at his home in Amarillo, Texas and taped some of his music, which was released on County Records as Eck Robertson, Famous Cowboy Fiddler. Robertson appeared at the UCLA Folk Festival in 1964, and at the Newport Folk Festival in 1965, accompanied by the New Lost City Ramblers.
Robertson died in 1975 in Borger, Texas and was interred at the Westlawn Memorial Park Cemetery. His tombstone is engraved "World's Champion Fiddler.