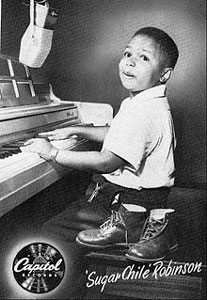 Born in Detroit in December 28,1938, Frank Robinson started playing the piano at a very young age. His natural talent playing the blues was immense, winning him a local talent show at the age of three. In 1946, Sugar Chile, as he came to be known, played for Harry S. Truman at the White House Correspondents Dinner. Sugar Chile’s career took off, and he became an incredibly famous child star selling out theaters and breaking box office records and was among the very first black child stars ever to be. Sugar Chile signed a deal with Columbia Records getting him on the Billboard RnB chart and in 1950s began touring with Count Basie and his orchestra. Time went by and Sugar Chile’s career faded out, as most child stars do, and he decided to got to school, playing small jazz gigs every now and then. Sugar Chile’s influence on America is immeasurable.