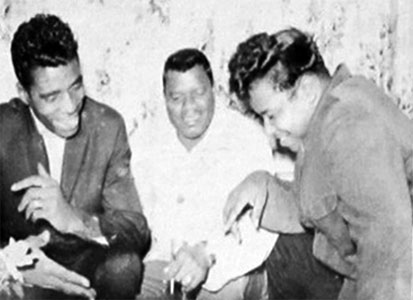 From Los Angeles, California, USA, this vocal group comprised first tenor lead Johnny Wyatt (b. 1938, Texacali, Texas; d. 1983), tenor lead Rochell Henderson, baritone Melvin Sasso, and bass T.C. Henderson. Their one hit, ‘Once Upon A Time’ (number 20 R&B, number 26 pop), from 1961, was part of the early 60s neo-doo-wop phenomenon when doo-wop experienced a resurgence of interest on the charts. The novelty of the falsetto lead of Wyatt plus the name of ‘Rochell’ gave many listeners the false impression that the group was led by a female. The follow-up, ‘So Far Away’ (1961), likewise featured Wyatt’s high pitched lead, but despite its excellence, failed to dent the charts. Other singles followed, both on Swingin’ and Challenge, but the Candles could not return to the charts. Their last recording, a sublime remake of the Olympics’ ‘Big Boy Pete’ was released in 1964 to an indifferent world. Wyatt went on to become lead of the soul-era group Johnny And The Expressions, who hit the charts with ‘Something I Want To Tell You’ in 1966. He also made some singles as a solo artist for Bronco during 1966-67.