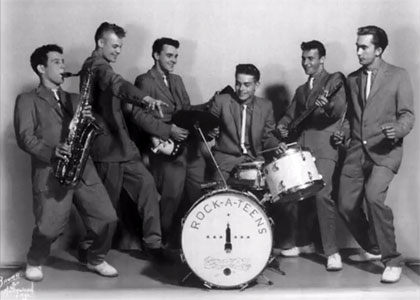 One of the genuinely compelling true primitive rock 'n roll acts of the late 1950's, the Rock-a-Teens (not to be confused with the identically-named 1990's outfit) generated some real excitement with their one major claim to fame, the bracing single of "Woo-Hoo" b/w "Untrue" for Roulette in 1959. As legend—probably close to the truth has it—the band cut the stomping A-side and its companion in the back room of a record store and sold it to the Doran label. They had it, but it was Roulette that got "Woo-Hoo" into stores and jukeboxes in 1959, before the band disappeared into the mists of time.
The " Rock'n'roll-A-Teens " were composed of Vic Mizelle, Bobby "Boo" Walke, Bill Cook, Eddie Robinson, Paul Dixon and Bill Smith.