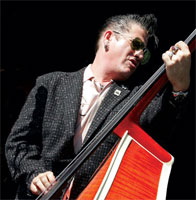 A longtime bassist with the rockabilly revival trio the Stray Cats, Lee Rocker was born Lee Drucker in 1961. With fellow Long Island schoolmates Brian Setzer and Slim Jim Phantom, he formed the Stray Cats in 1979. The group relocated to London the following year, scoring a series of U.K. Top Ten hits including "Runaway Boys," "Stray Cat Strut," and "Rock This Town" before returning stateside to enjoy similar success. The group's meteoric rise took its toll on the bandmembers, however, and in 1983 they split up; Rocker and Phantom then recruited ex-David Bowie guitarist Earl Slick to form Phantom, Rocker & Slick, scoring a minor hit in 1985 with "Men Without Shame.
The Stray Cats re-formed in 1986, failing to recapture their past glories; concurrently, Rocker also collaborated with the likes of Carl Perkins and Dave Edmunds. In the wake of 1992's Choo Choo Hot Fish, the Stray Cats again dissolved, with Setzer soon becoming a leading figure in the swing revival movement; Rocker, meanwhile, mounted a solo career that commenced in 1994 with the album Big Blue and continued with efforts including 1995's Atomic Boogie Hour, 1998's No Cats, and 1999's Lee Rocker Live. Four years passed before he returned with the blistering Bulletproof on the 33rd Street label. Racin' the Devil appeared in 2006 on Alligator, followed by Black Cat Bone in 2007 and Rock This World in 2009.