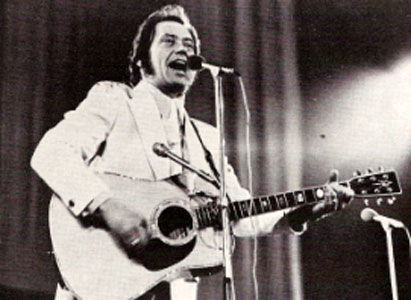 Singer/songwriter David Rogers was most popular during the 1970s, when over a 16-year period had 37 hits on the country charts, two of which made the Top Ten. He was born in Atlanta, Georgia and began playing guitar when he was eleven. In 1956 he auditioned before Roger Miller, but was soon drafted. After his discharge, Rogers worked at several jobs until founding the Atlanta-based David Rogers Band. In 1962, he began playing at the Egyptian Ballroom and remained there several years; club owner Kathleen Jackson eventually became his manager, and she paid for his initial demo tape, which was heard by Frank Jones at Columbia, who offered a contract. Rogers' first single, "Forgiven Fruit," came out in 1967. Later that year he debuted on the Grand Ole Opry, and also began appearing regularly on the WWVA Wheeling Jamboree. His second single, "I'd Be Your Fool Again," made it to the lower reaches of the charts in 1968. He had a couple more hits that year before moving to Nashville, where he appeared on several television shows, including the Ralph Emery Show. He then embarked upon his long string of hits that ended in 1979 with the Top 40 hit "You're Amazing." In 1981, he had a comeback with the minor hit "Houston Blue." Between 1982 and 1984, he had a few more minor hits and continued touring the U.S. and Britain until his death in 1993.