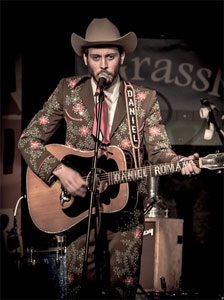 An insightful and subtly witty singer and songwriter whose music reflects Nashville's countrypolitan era while his lyrics follow a deeper and more insightful path, Daniel Romano was born in Welland, a city in Southern Ontario, Canada, in 1985. Romano's parents were folks musicians while his grandparents were fans of vintage country, and he grew up with a taste for classic folk and country sounds; he also developed a proficiency on a number of instruments, including guitars, drums, pedal steel, and keyboards. But while he was in high school, Daniel and his brother Ian Romano were bitten by the punk rock bug after hearing straight edge pioneers Minor Threat, and the siblings formed the indie punk band Attack in Black. While Attack in Black developed a loyal following in their native Canada, and their second album Marriage earned the group an award as NXNE Favourite New Indie Record Release at the 2007 CASBY Awards, bad business deals made trouble for the band, and they released their final album in 2009. (During Attack in Black's run, Romano also landed a side gig as drummer and multi-instrumentalist with City & Colour, a project led by Dallas Green of Alexisonfire.) Frustrated with the music business, Romano channelled his emotions into new songs that reflected his country influences, and after forming You've Changed Records with Steve Lambke of the Constantines, he released 2009's Daniel, Fred & Julie, a collaborative session with fellow songwriters Julie Doiron and Frederick Squire. Romano used his experiences in Attack in Black as the basis for his first solo effort, 2010's Workin' for the Music Man, which Romano recorded in his own private studio, with the artist handling nearly all the instruments himself, a practice he would follow on most of his subsequent work. Romano's second country album, 2011's Sleep Beneath the Willow, received a longlist nomination for that year's Polaris Music Prize, awarded to the year's outstanding Canadian album regardless of genre or commercial success. In 2013, Romano struck a deal with an American label, Normaltown Records, a subsidiary of New West Records devoted to up and coming independent artists, and Normaltown gave Romano his first U.S. solo release, Come Cry With Me. Romano was moved to the official New West Records roster for his next album, 2015's If I've Only One Time Askin'. During his downtime from music, Romano is also a successful graphic designer and a talented leather worker.