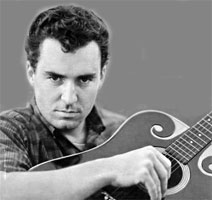 Singer and occasional actor Johnny Sea had a few country hits in 1959 and several in the mid-'60s. Born John Allan Seay, Jr., in Gulfport, Mississippi, he was raised in Atlanta, Georgia. He got his start at age 17, when he won a state talent competition. During the finals, a record company heard young Sea sing and offered him a contract, while another got the youth signed to Louisiana Hayride. He remained there two years before debuting on the Grand Ole Opry. Sea first appeared on the country charts in 1959 with a Top 15 single for NRC, "Frankie's Man Johnny." His 1960 follow-up, "Nobody's Darling but Mine," did equally well. When his career slowed down, Sea headed west to become a cowboy, living in different areas ranging from Los Angeles to Pawhuska, Oklahoma.
Sea returned to recording by 1964, when "My Baby Walks All Over Me" reached the Top 30. A year later, he had another hit with "My Old Faded Love." This success landed him a contract with Warner Brothers and his biggest hit, "Day for Decision," in 1966. The song, a reply to Barry McGuire's protest anthem "Eve of Destruction," not only peaked in the Top 15 in the country charts, but also crossed over to hit the Top 40 on the pop charts. He moved to Columbia in 1967, where he reverted to his birthname, Johnny Seay, and had a minor hit in 1968 with "Goin' to Tulsa." That year he also had his final chart appearance with "Three Six Packs, Two Arms and a Juke Box." Later that year, he wrote a song about his hard-luck neighbors the Yorks, "Willie's Drunk and Nellie's Dyin'," which led to an article about them in Life magazine. Sea later left to become a cowboy in Justiceburg, Texas. 2003 brought Sea's debut on the compact disc format when Collectables reissued his 1966 LP, Day for Decision.
Johnny Sea was killed in a crop dusting plane crash near West, Texas, May 14, 2016.