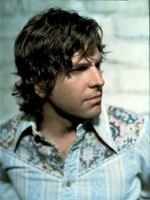 Brady Seals, the cousin of Jim Seals (of Seals & Crofts) and Dan Seals (of England Dan & John Ford Coley) and the nephew of Nashville legend Troy Seals, was obviously raised in a musical home. He began playing piano and writing songs at the age of nine, and was performing in a high-school band at the age of 16. After leaving home not long after, Seals returned to finish his education, but then left again. He ended up in Nashville and joined the group Little Texas after being recruited by Del Gray.
Seals spent six years with Little Texas, playing keyboards and co-writing all of the band's major hits. By 1995, Seals had left the group, however, inspired by his self-avowed mentor Rodney Crowell to begin a solo career. Seals signed to Reprise and released his debut album, The Truth, in 1996. The LP was quite a family affair, with Troy helping out on production and Brady's cousin T.J. a co-writer.