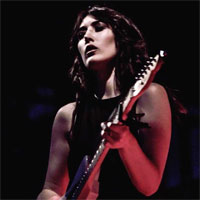 Nashville singer/songwriter Aubrie Sellers came into the game with a bona fide Music City pedigree, but her country-garage sound is all her own. The daughter of country star Lee Ann Womack and hit songwriter Jason Sellers, Aubrie's influences owe as much to Led Zeppelin as to icons like George Jones and Ralph Stanley. After honing her craft on-stage for a number of years, Sellers began working with veteran producer (and stepfather) Frank Liddell on a set of songs that framed her dulcet voice against a dark backdrop of electric guitars and plenty of attitude. Strong early singles like "Light of Day" and "Loveless Rolling Stone" arrived in late 2015 in anticipation of her 2016 debut album, New City Blues, on the Thirty Tigers label. Alongside critical acclaim, the album also reached the indie, country, and heatseekers charts.