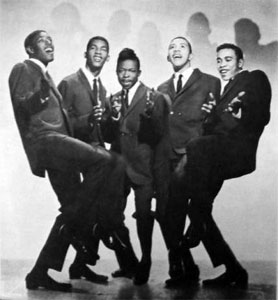 The Shells -- led by Nate Bouknight (aka "Little Nat") -- scored with a Top 30 hit with "Baby Oh Baby," charting for the tiny Johnson label in 1957. The group -- Bouknight, Randy "Shade Alston, Bobby Nurse, Danny Small, and Gus Geter -- continued to wax impressive 45s into the early '60s without much commercial interest, including 1958's "Sippin' Soda" and 1959's "She Wasn't Meant for Me."
In 1960, "Baby Oh Baby" was given a rare second chance when record collector archivists/reissue producers Donn Fileti and Wayne Stierle reissued the track to give it a second chance, hitting the pop charts on its second time around, charting at number 21. The Shells then made a hasty comeback, recording a mix of soul and pop standards as well as straight-ahead doo wop, such as "Be Sure My Love" and "So Fine." 1961 brought another fine effort, "Explain It to Me," and in 1962, the quintet cut the popular "Happy Holiday" with Ray Jones (aka Ray Lamont Jones) taking over lead vocals. In 1963, the Josie label paired the group together with the Dubs for half an LP, The Dubs Meet the Shells, a battle of the bands album in the tradition of The Paragons Meet the Jesters).