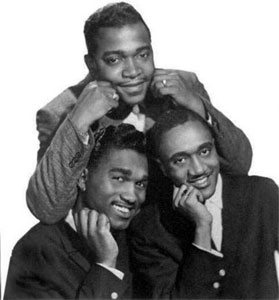 Shep & the Limelites' name will forever be etched in rock & roll history for recording the endearing "Daddy's Home," a tender ballad about returning from war that soared to number two on the pop charts in May 1961. James Sheppard's career began with the Heartbeats, a band from Jamaica, Queens, NY. (They were the Hearts until a female group from Harlem with the same name scored a minor hit called "Lonely Nights" in early 1955.) The Hearts would mimic songs by the Orioles, the Ravens, Five Keys, the Moonglows, the Larks, the Flamingos, and others. When not rehearsing, they competed with wannabes in parks and under street corner lamps. During one encounter they battled a group led by James Sheppard; impressed, the Hearts asked Sheppard to be their new lead.
The acquisition of Sheppard helped the Hearts twofold: not only could he blow, he also wrote gorgeous ballads. Shortly after he joined the Hearts, they became the Heartbeat Quintet and started playing clubs, weddings, graduations, ceremonies, and basement parties. Jazz saxophonist Illinois Jacquet befriended them and let them rehearse in his basement. Jacquet's brother arranged their first recording opportunity. "Tormented," a ballad written by Sheppard, was released on Network Records in Philadelphia, but lack of promotion killed any chance of success. After shortening their name to the Heartbeats, they came to the attention of William Miller, who worked for Hull Records. He introduced the quintet to owner Bea Caslin, who was impressed by their tight harmonies and Sheppard's songwriting skills; the group was soon signed to the label. Three initial releases sold well, particularly the magnificent "Your Way"; all were ballads written by Sheppard.
The minor successes of the recordings encouraged Hull Records to invest in professional choreography to tighten the band's stage presentation. Appearances at premier New York venues like the Brooklyn Fox and the Apollo had become common. To the surprise of Hull Records, fans called radio stations in record numbers demanding to hear the flip of "Baby Don't Go," the exquisite "A Thousand Miles Away." Sheppard's craving for an ex-girlfriend who moved to Texas had inspired "A Thousand." Not only did the song do well locally and regionally, it started selling nationwide. Bookings poured in, providing appearances with luminaries like Ray Charles, B.B. King, and the Flamingos. Touring, however, didn't prove lucrative, as they experienced an inordinate share of misfortunes including vehicle breakdowns and promoters leaving with the proceeds. "Daddy's Home" would be the Heartbeats' final Hull Record release.
Bea Caslin then sold the Heartbeats' contract and the publishing rights to the Roulette Record conglomerate. "I Won't Be the Fool Anymore" came out on Rama Records in 1957; after another Rama release, Roulette switched them to Gee Records, and eventually to Roulette itself. "500 Miles to Go" and "After New Year's Eve" were the most successful commercially, while "Down on My Knees" was the most notable artistically.
Problems within the group began to show: the last straw came when Sheppard passed out at the microphone in Philadelphia, and bandmate Al Crump sang the lyrics until Sheppard was able to continue. The group wanted to breakup after this embarrassment but had commitments, so the group sang on gigs as a quartet doing standards, and Sheppard appeared afterward to sing the Heartbeat hits. They did their last gig in 1959 at the Howard Theater in Washington, D.C., and Sheppard opened a restaurant in Jamaica, Queens, singing solo on the side.
Two years after the the Heartbeats' demise, Sheppard met some old friends -- Clarence Bassett and Charles Baskerville of the Videos -- and formed Shep & the Limelites. Bassett had also warbled with the Five Sharps. After two flops on Apt. Records, Shep returned to Hull Records and Caslin signed them on the spot. "Daddy's Home" was Shep & the Limelites' first Hull release and it nearly aced the pop chart, stopping at number two. (Ricky Nelson's "Travelin' Man" kept it from the top spot.) Hull released 12 Shep & the Limelites singles between 1961 and 1965. "Our Anniversary" went to number seven R&B in 1962 and was their only other chart success. Personal differences caused the Limelites to disband by 1966. Baskervlle joined the Players, and Bassett sang with the Flamingos. and later Creative Funk. Sheppard reunited with the Limelites in 1970 to perform on the oldie revival circuit, but this quickly ended when Sheppard was found on January 24, 1970, shot to death in his car on the Long Island expressway.