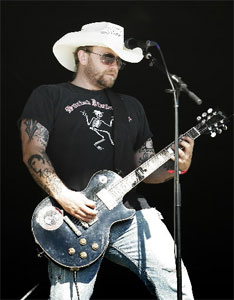 Jackson Taylor specializes in a good old outlaw country sound with his band, which ignites with enough punk energy to go over on any stage the group takes and with enough Southern rock elements and pure straightforward songwriting to always leave a lasting musical impression. Taylor was born in Moody, TX (just north of Austin), to migrant working parents, one of 11 siblings, and his childhood was a nomadic one, moving from labor town to labor town. Taylor's main cultural constant during this time was the country music his father so treasured, and Taylor grew to love it himself and was soon trying his hand as a musician. He eventually graduated from high school in a small farming community in the state of Washington, moving almost immediately back to Texas before trying his hand in Nashville. There he found work as a songwriter, but somehow the often sheep-like following of the town's music business didn't sit well with him and Taylor moved on to New York, then to L.A., and eventually back to where it all began in Texas, signing with Paul Gaske's independent Gaske label. Now working with a solid band, the Jackson Taylor Band, he released a solid series of albums, including Hollow Eyed & Wasted, Humbolt County, Gypsies & Drifters, Easy Lovin' Stranger, Goin' Down Swingin', The Whiskey Sessions, and, switching labels to the Smith Entertainment Group, 2007's Dark Days and 2009's Aces 'n Eights. The ensuing years saw Taylor operating both solo and with the newly minted Sinners, releasing a string of hard driving country-rock albums including Crazy Again and Which Way Is Up.