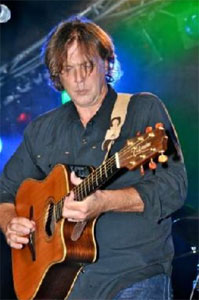 Born in 1963 in Clifton, Virginia, USA. As a child Thompson took an interest in traditional country music, in particular that of Hank Williams, and by the age of 13 he was writing his own songs. While still in junior school, he met bluesman John Jackson, who taught him the basic principles of blues guitar. After leaving school, Thompson tried making it as a musician, recording his independent debut album in Nashville in 1988 but soon thereafter family responsibilities forced him to put his music career on hold. A decade on, and he resumed his occupation, weathering the break-up of his marriage, and dedicating himself to music.
Influenced by traditionally-based artists such as Joe Ely, Lefty Frizzell, Waylon Jennings, Mickey Newbury, Jimmie Rodgers and Williams, Thompson finds genuine emotions in the music he performs. This has helped bring him a strong following among those who seek traditional values in contemporary country music. He writes many of the songs he sings, some of which are distinctly autobiographical but have qualities that strike chords of recognition in his listeners. He released two albums on the Jackpot label in the early 00s. (NB: Not to be confused with the Christian singer of the same name.)