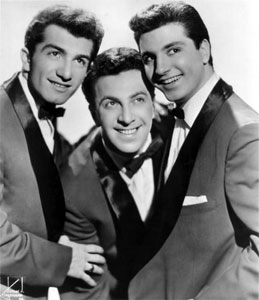 The Three Chuckles sounds like an improbable name for a rock 'n' roll act, and to hear their sound and see them in action in one of the handful of movies in which they appeared — Rock, Rock, Rock (which was shot in the Bronx, New York) — they seem an equally unlikely group to be designated a rock 'n' roll act at all. They were more of a harmony pop trio who happened to be young enough to "pass" for a rock 'n' roll act at a time when that designation was a little less well defined than it finally became. Tommy Romano (Vocalss, guitar) and Tommy Gilberto, aka Russ Gilberto (Vocalss, bass) hailed from Red Hook, Brooklyn in New York City, and linked up with accordionist Phil Benti to form the Three Chuckles, the name derived from a popular candy bar of the early 1950's. This all pre-dated rock 'n' roll, and the group established themselves in clubs, lounges, and bowling alleys up and down the East Coast well before the new music was heard by a mass white audience. They were contemporaries of the Four Lovers and other Italian pop-Vocals ensembles of the period, and were obviously good, because they were so busy that it cost them their keyboard man, Bentl deciding he didn't want to spend so much time on the road. The group found a successor in then 15-year-old Teddy Randazzo, more than a decade younger than Romano and Gilberto but already a fine player on the accordion. It was this version of the group that, following a gig in New Jersey, were handed a song called "Run Around" by its author, a truck driver named Cinino Colacrais. A couple of years later, when they got their first opportunity to make a record, they remembered the song, and it was cut as the B-side of "At Last You Understand". Issued on Boulevard — the newly-christened pop imprint of the r&b-oriented Great Lakes label — the record was good enough to be bought out (along with the trio contract) by RCA Victor; it then got flipped over and the B-side slightly revised as "Runaround", and made it to the number 20 spot on the national charts. The Three Chuckles were suddenly an act with a following far beyond the East Coast, and Randazzo, who'd sung lead on the hit, had emerged as the group's featured Vocalsist at the age of 17. He would soon emerge as a songwriter as well, initially in collaboration with Colacrais on their second single A-side, "Foolishly", which didn't hit. Their single "Times Two, I Love You" became a minor chart entry, and after that they were moved over to the label's Vik imprint, which had started out as an r&b-oriented label in the early 1950's. And it was there that they topped the charts with "And The Angels Sing", a pop Vocals piece with a beat and some emphatic electric guitar, which led to their recording an entire self-titled LP. By this time, their sound was rock 'n' roll of a sophisticated sort, nicely harmonized and elegant but with Randazzo's lead singing and their choice of repertory achieving a kind of white soulfulness that qualified — or if it didn't, it was a short jump to doing so, and kids did eat up their records; their original LP reportedly sold 400,000 copies, a figure that one could easily doubt (although if the figure was even an sixth of that, it would be a remarkable achievement for a rock 'n' roll act of the period). In any case, they were good enough to attract the attention of deejay/impresario Alan Freed, who put them into Rock, Rock, Rock in 1956 — Freed made a point, however, to also give Randazzo a featured spot on his own in the movie.That move, which immortalized the group on film, also spelled their end. Soon after the release of the movie, Randazzo decided that it was time for him to leave the fold for a career on his own. He went on to fulfill all of the promise that those early sides showed, working for a time as a singer and then turning to songwriting and producing and enjoying decades of success. The Three Chuckles soldiered on for a time with Jackie Farrell as the third member, but it was soon apparent that their moment and time had passed. They never recorded after Randazzo left, and had broken up by 1958, though Tommy Romano remained in the business into the 1970's, and eventually formed a duo with Karen Gayle, working as A Chuckle And A Chicklet. Their sound today seems like a lost trail in the history of rock 'n' roll, most of it not quite hot enough to fit in, but just passionate and soulful enough to qualify. In 1997, Collectables Records issued Golden Classics, an 18-song collection that showed off the group's range to great advantage. Those late sides, including "And The Angels Sing", "Gypsy In My Soul" and "We're Gonna Rock Tonight" — the latter as suggestive a piece as any white group ever did, rivaling "Rock Around The Clock" (its obvious model) and Chuck Berry's "Reelin' And Rockin'" — show their harder sound and are worth the price of admission.