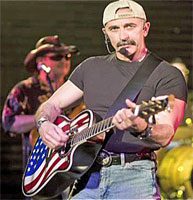 Aaron Tippin was part of the commercial explosion of new traditionalist country in the early '90s, making his name with a mixture of macho, rowdy honky tonkers, sentimental ballads, and patriotic working-man's anthems. Tippin was born in Pensacola, FL, in 1958 and grew up mostly on a family farm near Greer, SC, where he first started singing to pass the time while doing chores. He started playing guitar at age ten but also inherited a love of flying from his father, who'd worked as a pilot prior to becoming a farmer. Tippin himself earned his pilot's license at 15 and began flying professionally before the age of 20. He was studying to become a commercial airline pilot when the industry took a major downturn, which convinced him to return to music. He played the local honky tonk circuit and worked on his songwriting while holding a series of blue-collar day jobs. Unfortunately, his marriage broke up, and with nothing to lose, he finally moved to Nashville in 1986. He landed a job as a staff songwriter at the legendary Acuff-Rose firm, where his compositions were recorded by the likes of Charley Pride, Mark Collie, and David Ball, among others. In 1990, his demo tape landed him a contract with RCA.
Tippin's debut album, You've Got to Stand for Something, was released in 1991; its title cut became a Top Ten smash in the wake of the Persian Gulf War, and Tippin was invited along on Bob Hope's USO tour. His second album, 1992's Read Between the Lines, was a million-selling Top Ten smash, producing three Top Ten singles in "I Wouldn't Have It Any Other Way," "My Blue Angel," and his first number one, "There Ain't Nothing Wrong With the Radio." 1993's The Call of the Wild underlined Tippin's penchant for rabble-rousing anthems like "Honky Tonk Superman," the Top Ten "Working Man's Ph.D.," and the Top 20 title cut. The following year's Lookin' Back at Myself was less successful, but 1995's Tool Box returned him to the top of the singles charts with "That's as Close as I'll Get to Loving You". Tippin also remarried that year.
When Tippin's follow-up singles failed to duplicate their predecessor's popularity, his relationship with RCA began to fray. They eventually parted ways, and it wasn't until 1998 that Tippin managed to score another deal, this time with Disney subsidiary Lyric Street Records. He co-produced his label debut, What This Country Needs, which was released later that year and returned him to the Top Ten via the single "For You I Will." The follow-up, 2000's People Like Us, became the first Tippin album to make the country Top Five, thanks to the number one smash "Kiss This," a song co-written by Tippin's wife Thea. The Christmas album A December to Remember followed in 2001, and Tippin returned with a proper follow-up, Stars & Stripes, in 2002. The post-September 11 anthem "Where the Stars and Stripes and the Eagle Fly" was a crossover smash, not only reaching number two on the country charts but also climbing into the pop Top 20. An album of trucking songs, In Overdrive, appeared in 2009. Tippin spent the next few years relatively quietly, but in 2013 he set out on the road with fellow country singers Sammy Kershaw and Joe Diffie on a tour called All in the Same Boat; the trio released an accompanying album of the same name in May.