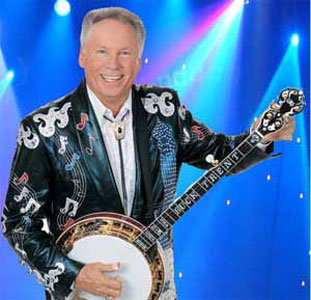 Buck "Mr. Banjo" Trent is not only one of the finest players in country music, he is also the inventor of the electric banjo. Born Charles Wilburn Trent in Spartanburg, South Carolina, he began playing steel guitar at age seven, and debuted professionally on an Ashville, North Carolina television station at age 17. He joined the Bill Carlisle Show near the end of the 1950s and soon afterward made his first appearance on the Grand Ole Opry. In 1962, he joined Porter Wagoner's Wagon Masters and designed the electric banjo, an instrument shaped something like a steel guitar which featured a mobile bridge used to change the pitch. Trent remained with Wagoner through 1973 and then spent the next seven years as the opening act for Roy Clark; he also appeared regularly as a featured musician on the long-running TV show Hee Haw. He began recording in 1962, initially under the name Charles Trent; during the '70s, he recorded several albums, including Bionic Banjo (1976). He began recording on his own Buck Trent label in the 1980s and two years later recorded an eponymous album on MCA/Dot. During the 1990s, he was a regular performer in Branson, Missouri.