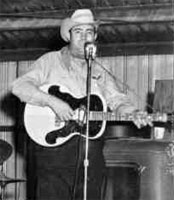 Even in Texas folk and country music circles, singer and guitarist Don Walser is regarded as unique. The songs Walser specializes in aren't exactly current; he sings classic old Western swing tunes. In a sense, he's a man on a mission: keeping the old Texas country songs alive. Songs like "Cowpoke," "Tumbling Tumbleweeds," and "Mexicali Rose" are signature tunes for Walser, who is also one of the country's premier yodelers. Songs penned and popularized by Bob Wills, the Sons of the Pioneers, Hank Williams, Faron Young, Merle Travis, and Johnny Horton are all part and parcel of what you're likely to hear in the course of a typical Walser show.
Walser's mother died when he was 12 and his father worked nights, so to keep himself company, he listened to the radio in his childhood home of LaMesa in West Texas. He formed his first band at 16, and a year later, he was playing the few clubs and roadhouses around LaMesa. At the same time Walser was playing country music, a west Texas neighbor of his, Buddy Holly, was raising the roofs at local roadhouses playing rock & roll. As rock & roll came into fashion in the late '50s, Walser and other country musicians were nearly run out of business.
With the rise of rock & roll, Walser put his budding music career on hold in 1957 and joined the National Guard. Through a procession of day jobs with the National Guard, Walser's musical adventures remained an avocation. Most recently, he worked as an internal auditor for the state Adjutant General's office in Austin. But through the 39 years with the National Guard, he always played music with various bands, mostly as a hobby. He retired in 1994 and picked up where he'd left off in his youth, taking his act on the road full-time.
Walser's albums for Watermelon Records include a few of his originals, like "Rolling Stone from Texas." Many fans are awestruck upon first hearing Walser's unique voice. His albums for Watermelon include Texas Top Hand, Rolling Stone from Texas, and Down at the Sky-Vue Drive-In. Walser tours around Texas and the U.S. with a group called the Pure Country Band, and he's also quick to credit Ray Benson's group, Asleep at the Wheel, with helping to keep old, often obscure Western swing tunes alive. Now in his late sixties, Walser has lived in Austin since 1984, where he's found legions of supportive fans who believe in and understand the "real country" music he performs.