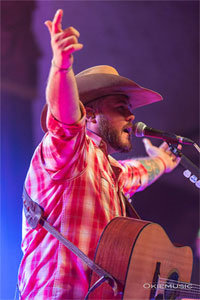 A modern-day traditionalist who is keeping the Lone Star honky tonk sound alive, Josh Ward is a songwriter and singer who has won a large and growing following in his native Texas, playing country music with rock and blues accents. Ward was born in Houston on May 15, 1980. His first exposure to music came in church, singing vintage gospel hymns with his family during Sunday services when he was four years old. At home, Ward's family favored country music, and as a teenager he developed a passion for classic country sounds, particularly George Strait, Merle Haggard, George Jones, Willie Nelson, and Waylon Jennings. In his high school days, Ward was an amateur rodeo rider, and after learning to play guitar, he began serving double duty at rodeo events, playing music in the parking lot before riding later in the day. Ward joined a band in 2003, and began making the rounds of the Texas honky tonk circuit. After a spell playing with a Western swing outfit, Ward formed his own group, and in 2007 he released his first studio EP, an eight-song effort titled Hard Whiskey. After more live playing in the Southwest, Ward issued his first full-length album, Promises, in 2012. Produced by Greg Hunt, who'd previously worked with LeAnn Rimes and Pat Green, Promises spawned five singles that all hit the Top 20 of the Texas music charts and in 2013, Texas Regional Radio named Ward New Male Vocalist of the Year. Two years later, he returned with his second album, Holding Me Together, which was another Southwestern hit, with four songs from the LP reaching number one on Texas Regional Radio listings. In 2018, he delivered the full-length More Than I Deserve, which cracked the Top 50 of the Billboard Independent Albums chart. The concert album Live at Billy Bob's Texas arrived in 2019.