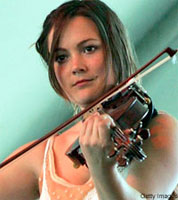 Sara Watkins first came to prominence as a member of Nickel Creek, the progressive bluegrass which also featured her brother Sean and childhood friend Chris Thile. Once the group gained momentum in Americana circles in the 2000s, Watkins began playing sessions, appearing on records from rockers and country artists alike, establishing herself as a presence outside of the group. Sara Watkins launched her solo career in 2009, after Nickel Creek entered an indefinite hiatus, and from that point on, she easily moved between the folk and adult alternative scenes, a versatility highlighted by the Watkins Family Hour shows she and Sean held at the hipster venue the Largo in Los Angeles and her founding of the singer/songwriter supergroup I'm with Her, who released their debut album in 2018.
Born on June 8, 1981 in Vista, California, Sara began playing music as a child, learning fiddle as her older brother Sean studied mandolin. Sean met Chris Thile through their mutual tutor and soon the trio formed Nickel Creek in 1989, the year Sara turned eight. Following a debut appearance in Carlsbad, California, the trio became fixtures at bluegrass festivals in the '90s. As they built an audience, they self-released Little Cowpoke in 1993 and Here to There in 1997. They won over Alison Krauss, who helped them get a record deal with Sugar Hill and produced their eponymous debut for the label. Released in 2000, Nickel Creek was an immediate hit in bluegrass and Americana circles, and over the next few years, they steadily built their fan base. This expansion of their audience was helped by sessions and side projects, such as the Mutual Admiration Society, a group featuring all three members of Nickel Creek, Glen Phillips of Toad the Weet Sprocket and John Paul Jones, the bassist for Led Zeppelin. The Mutual Admiration Society recorded an album which they supported with a tour in 2004.
Nickel Creek's prominence in modern bluegrass and Americana circles helped Sara Watkins land a solo deal with Nonesuch Records in 2008. John Paul Jones produced her self-titled debut, which appeared in April 2009. Although she had gone solo, she hadn't abandoned her Nickel Creek bandmates -- she and her brother Sean often played as the Watkins Family Hour at the Largo in Los Angeles -- nor did she shy away from collaborative work, frequently playing sessions and sharing the stage with all manners of folk, country, and rock musicians.
Sun Midnight Sun, her second solo album, was released in September 2011; it was produced by Blake Mills. Nickel Creek reunited for the 2014 album A Dotted Line, which was followed the next year by an official Watkins Family Hour album. Watkins moved to New West Records for 2016's Young in All the Wrong Ways.
In 2017, Watkins united with fellow singer/songwriters Aoife O'Donovan and Sarah Jarosz to form I'm with Her, who released their debut album See You Around in February 2018.