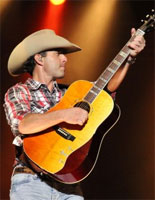 An independent-minded singer and songwriter in the Texas honky tonk tradition, Aaron Watson plays country music with a traditional feel but a young man's energy, and has earned a loyal fan following in the Lone Star State. Born in Amarillo, Texas, Watson's earliest musical influences were the gospel hymns he sang in church with his family and the classic country records by George Jones, Merle Haggard, and Willie Nelson his folks played around the house. Watson began writing and singing his own songs while he was a student at Abilene Christian University, and after graduating he became a regular fixture on the Texas honky tonk circuit.
In 2002 Watson released his first album, Shutupanddance, which was a major success in Texas, spawning the hit singles "Off the Record," "I Don't Want You to Go (But I Need You to Leave)," and the title tune. The album also earned him airplay and media attention nationwide, and Watson followed up his debut in 2004 with The Honky Tonk Kid, which was produced by Ray Benson of Asleep at the Wheel and featured guest vocals from Watson's hero, Willie Nelson. Watson and his band the Orphans of the Brazos captured their energetic live set on tape with their 2005 release Live at the Texas Hall of Fame, and Watson returned to the studio in 2006 for his fourth album, San Angelo.
In 2008, Watson began transforming his sound -- albeit subtly and without leaving his Texas roots behind -- toward a more contemporary country radio-friendly approach on the reflective Angels & Outlaws. In 2010 he released The Road & the Rodeo, returning to more uptempo material, while smoothing his edges further. The result was more airplay, higher-profile touring engagements, and charting inside Billboard's Top 200. Watson's success continued to grow with 2012's Real Good Time, which rose to number nine on the Billboard Country Albums chart and cracked the Top 20 of the Independent Albums survey. And Watson scored a major breakthrough with 2015's The Underdog. Belying the album's title, The Underdog (produced by Keith Stegall, who also worked with George Jones and Alan Jackson) made its debut on the Billboard Country Albums chart at number one, the first time a male artist on an independent label had topped the chart in his first week. "That Look," a single drawn from the album, also hit the Country Airplay chart, topping out at 47, and another, "Getaway Truck," was a radio hit in Watson's native Texas. The hard-working Watson did plenty of touring in support of the album, playing 148 shows in 2015. After regrouping in 2016 he returned early the next year with Vaquero, notching another hit in "Outta Style" and rising to number two on the Top Country Albums Chart. Keeping up a high profile, Watson issued his first live album with 2018's Live at the World's Biggest Rodeo Show then followed it up a year later with the holiday release An Aaron Watson Family Christmas. He announced the impending release of his next studio album, Red Bandana, with the 2019 singles "Kiss That Girl Goodbye" and "To Be the Moon."