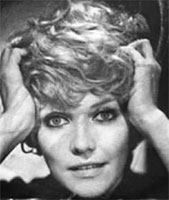 US Rock 'n' Roll singer from Austin (Texas). She started singing at the age of three at "Tourist Courts" in Texas, had her first professional gig at age 14 and soon went on to have a local TV show in the Austin area with Cactus Pryor. "Now Dig This" was the show on local KTBC TV, and that soon lead to two singles of her own with Domino. She was also on the The Slades' "You Cheated"- she was singing the doo wop in the background. She continued singing backups on many Domino sessions and had her own group the Debs. Other credits include working with Bobby Doyle - starting with the The Slades and continuing until his passing in 2007, a brief stint with the The New Christy Minstrels, many 45's in the 60's and 70's, and the featured vocalist with the Houston Pops Orchestra for ten years.