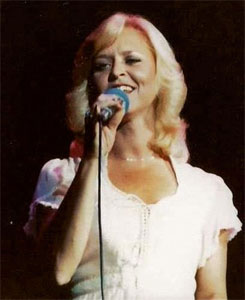 b. 12 March 1947, Sikeston, Missouri, USA. Her father was Onie Wheeler, who sang at the Grand Ole Opry for more than two decades. Her mother, Betty Jean, was also a singer who broadcast as Little Jean on KWOC, out of Poplar Bluff, Missouri. This musical atmosphere pointed Wheeler towards a career as an entertainer, which she began as a young girl. In 1958, she recorded ‘Go Home’ with her parents, and made several solo sides. In 1964 she was recorded by Ray Pennington for Pamper Records in Nashville, Tennessee. In 1967, she and Shirley Michaels joined Bobby Harden in the Harden Trio. Among records made with Harden was ‘We Got Each Other’.
As Wheeler’s career developed, she appeared at the Grand Ole Opry and was heard on the Renfro Valley Barn Dance and the Wheeling Jamboree. In the early 70s, she recorded for RCA Records and Capitol Records, and had a chart success with ‘Born To Love And Satisfy’. Wheeler gained a following as she toured with shows headlined by leading entertainers, such as Roy Acuff, Lefty Frizzell, Loretta Lynn, Ronnie Milsap, Ernest Tubb and Faron Young, and for more than a decade she opened for Conway Twitty.
Between the early 90s and the early 00s, Wheeler was inducted into the halls of fame of the Lone Star State Country Music Association, Radio Country and Airplay International. Meanwhile, she won numerous awards including Country Music Association of America’s American Eagle Female Vocalist Of The Year and the CMAA Record Of The Year, for 1996’s ‘I’d Rather Die Standing’. Songs in Wheeler’s repertoire, many of which she has composed herself and which range through country to gospel, include ‘Somebody Hold Me’, ‘I’ll Be Your Star Today’, ‘Need To Know Basis’, ‘You’ve Got All I Am’, ‘Gypsy Love’, ‘What Can I Do To Make You Happy’ and ‘You’re Smothering Me’. She has worked extensively in the Christian music field and has served as an Executive Board Secretary for Music City Christian Fellowship.