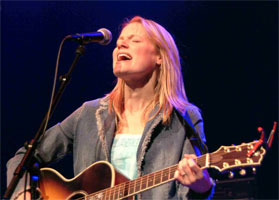 Although the work of new traditionalist singer/songwriter Kelly Willis earned widespread critical acclaim, she found little in the way of comparable commercial success; her sound, a smart hybrid of country and rock, simply assimilated both musical styles too well to gain acceptance in either camp. Born in Oklahoma and raised in the Washington, D.C., area, she began performing in her boyfriend (and future husband) Mas Palermo's band at the age of 16. Her powerhouse Vocalss were so popular with club audiences that soon the group was renamed Kelly & the Fireballs in her honor. After Willis graduated high school, the band moved to Austin, Texas, only to break up six months later.
As a result, Willis began learning to play guitar while drummer Palermo honed his songwriting chops. The duo started a new band, Radio Ranch, with guitarist David Murray, steel player Michael Hardwick, and bassist Michael Foreman. One of Radio Ranch's performances so impressed singer Nanci Griffith that she began lobbying her label, MCA, to sign to group, leading to Willis' 1990 debut, Well-Travelled Love. In an attempt to capitalize on Willis' stunning looks, she was marketed as a girl-next-door type, and despite the presence of the full band, only her name appeared on the album jacket. Despite the glowing reviews, the LP fared poorly, and so, for her 1991 sophomore effort, Bang Bang, she was depicted as a coquettish pinup. Again, however, the good publicity the record received did not translate to radio airplay, let alone chart sales.
For her third album, comprised largely of her own songs, Willis joined forces with pop producer Don Was; the self-titled 1993 effort suffered the same fate as its predecessors, however, and she was dropped by MCA shortly after its release. Following a few years of relative inactivity, she resurfaced in 1995 duetting with Son Volt's Jay Farrar on the Red Hot & Bothered compilation, and after issuing a 1996 independent label EP, Fading Fast, announced plans for a 1997 LP on A&M. In late 1996, she married fellow Austin musician Bruce Robison.
As the '90s drew to a close, Willis inked a deal with Rykodisc. Her fourth album, What I Deserve, appeared in 1999 and it was a breakthrough hit for Willis. Time Magazine hailed the album as "the smartest, most consistently worthwhile country CD" to have been released that year. Three years later, Willis returned to the scene with Easy, which included collaborative efforts with Vince Gill, Union Station's Dan Tyminski, and Nickel Creek's Chris Thile. Willis tossed her hat into the crowded yuletide scene in 2006 with the amiable Happy Holidays, followed by her seventh album, the Chuck Prophet-produced Translated from Love in 2007. In 2008, Willis announced she was taking some time off from the road. She made only sporadic appearances, usually as a guest with Robinson, but otherwise kept a low profile. She finally emerged from her long silence with Cheater's Game, a collaborative album with her husband. The set featured songs by Dave Alvin, Robert Earl Keen, Hayes Carll, and others; it was released in in time for Valentine's Day in 2013. Critical and popular reception of the recording proved so promising, the two decided to collaborate on another duets collection with the same producer. Our Year was released in the spring of 2014. In 2018, Willis released her first solo effort since 2007; Back Being Blue included ten songs, six written by Willis, with Robison serving as producer.