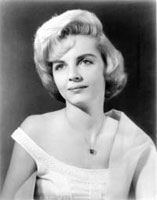 Born Mary Ann Ward, 4 July 1930, Birmingham, Alabama, USA, d. 19 December 1999, Madison, Tennessee, USA. Ward learned to play piano as a child (later adding guitar) and after initially starting nursing training, decided to pursue a singing career. She first sang with her sister, before appearing on local radio and television in Birmingham. In 1957, she gained a number 12 US country hit with her self-penned ‘Are You Willing, Willie’, recorded on the tiny Cherokee label. In 1960, another self-penned song, ‘That’s My Kind Of Love’, recorded on Happy Wilson’s Guyden label, reached number 5, which resulted in her joining Columbia Records (she also married Wilson). She became a regular on WSM’s Friday Night Frolics. In 1961, her first Columbia hit, ‘I Think I Know’, made the Top 10, with the follow-up, ‘There’ll Always Be Sadness’, peaking at number 21. Between 1963 and 1968, she achieved eight more Billboard chart entries, with ‘Shake Me I Rattle’ and ‘Crazy Arms’ both making the Top 20. She also gained Top 25 status with ‘Slippin’ Around’, a duet with George Morgan. In 1967, she moved to Decca Records, but after the self-penned ‘Mama Sez’ in 1968, she failed to make the charts again. Her ability to change from sultry ballads to lively barn dance-type numbers made her a popular performer on the Grand Ole Opry, where she was deemed a singer’s singer, and she was one of the first country stars to play Carnegie Hall in New York. She continued to tour in the USA and Canada and, in later years, became a popular performer in various Las Vegas venues until her death in 1999.