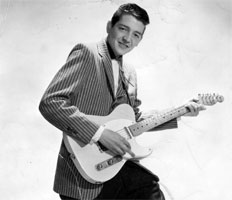 Rusty York was born May 24, 1935, in Harlan County, KY. A 1951 concert appearance by Earl Scruggs & the Foggy Mountain Boys inspired the already musically curious York, who, after moving to Cincinnati, bought a five-string banjo and began to play out. His first collaborator was Willard Hale, and the duo gigged locally with acts like Jimmie Skinner and Hylo Brown. When Elvis Presley broke in 1957, York decided that an update in sound was necessary. He and Hale cut a version of Buddy Holly's "Peggy Sue" for King, which led to York's teaming with vocalist Bonnie Lout in a rockabilly project. 1959 saw the recording of two of York's most rollicking numbers, "Red Rooster" and "Sugaree." The rockabilly phase was a minor success, but by the 1960s, York had returned to bluegrass and country. He also began to cultivate an interest in the business end of country and in 1961 started building a studio in his garage. By the early '70s York had retired from performing to concentrate on his Jewel Records imprint/studio full-time. Jewel continued to operate out of Cincinnati throughout the 1980s and '90s, and into the 21st century.