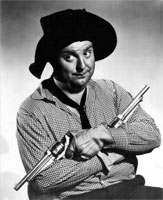 Based on his record sales, Smiley Burnette wasn't more than a footnote in the annals of recorded country music. However, thanks to his appearances as a sidekick to Gene Autry in dozens of Republic Pictures Westerns before World War II, and with Charles Starrett and Roy Rogers later on, he was one of the most familiar country & western performers in movies, and a beloved performer on stage and radio.
Burnette began his performing career at age nine, playing the musical saw. He organized and led his own band in high school in the late '20s, and after graduation he set out on a performing career. Burnette became successful as a one-man band — he claimed proficiency on 100 instruments — and worked in vaudeville before becoming an announcer and performer on radio in Tuscola, IL. Autry discovered Burnette and hired him to appear on the WLS Barn Dance out of Chicago, where Autry was already the top singing star. His recording career began around this time, centered around the Conqueror and American Record Company labels.
Autry went to Hollywood when producer Nat Levine at Mascot Pictures decided to put a professional country singer into the Ken Maynard film In Old Santa Fe, and he brought Burnette with him. The duo was established on the screen as a double act, one of the most popular in the history of B picture Westerns. With his portly physique, good-natured but slightly dim-witted persona, and trademark floppy hat, he became a familiar screen presence as Autry's sidekick Frog Milhouse, appearing in 55 Westerns alongside Autry between 1933 and 1942. In most of these, he was also called on to sing at least one number of his own, which he did in either his normal voice, which was funny enough, or a deep, frog-like croak.
As an actor, Burnette was one of B Westerns' two "kings of the sidekicks" (the other was George "Gabby" Hayes, who didn't sing). His featured musical numbers, like his records ("Mama Don't Allow No Music" on ARC, reissued by Sony in 1995, is a good representative piece), were usually novelty songs with a strong comedic content, in contrast to the romantic ballads that Autry or Rogers would do in the same movies. He also made appearances in supporting roles in non-Westerns, including Republic's serials (Dick Tracy, etc.) in the 1930s. Burnette subsequently did dozens of films with Rogers and Starrett (The Durango Kid).
Burnette was a successful songwriter, and his music was recorded by the likes of Bing Crosby, Dean Martin, Red Foley, and Ferlin Husky, among others. He made appearances on his own, as a musical performer, on the Ozark Jubilee, Jubilee USA, the Grand Ole Opry, and the Louisiana Hayride, and played rodeos as well. In 1962, Starday Records released an album of Burnette's funniest songs under the title Ole Frog. From 1962 through 1967, he was a regular on the television series Petticoat Junction, playing railroad engineer Charlie Pratt.
In 1971, four years after his death from leukemia, Burnette was inducted into the Nashville Songwriters Hall of Fame.