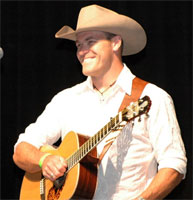 Canadian country singer George Canyon was born Fred Lays Jr. on August 22, 1970. He grew up in Fox Brook, Pictou County, Nova Scotia. His first guitar was a gift from his mother and father, who made the instrument for him when he was four years old. Before he reached his teens, Canyon was a proficient guitarist and giving instruction to others. Like fellow Canadian singers Gil Grand and Paul Brandt, Canyon studied pre-med before he was drawn to a career in country music. He even spent time as a hospital orderly, among his other odd jobs, but a foray into musical theater at school led to a change of plans.
During his years at Nova Scotia's St. Francis Xavier University in the early '90s, the singer/songwriter was auditioning for a production when members of a local rock group heard him singing. The band, Branded, decided they'd found the country-sounding Vocalsist they had been looking for and invited him on tour. The music bug bit Canyon hard, and for several years he never looked back. Canyon performed in the Calgary region of Alberta, where he met the woman who would become his wife. When they wed in 1994, he stepped away from his musical aspirations and returned with her to Nova Scotia. But the pull of music was strong, and after several months he made the decision to embark on a solo career. Canyon and his wife, Jennifer, packed up once again to head back to Alberta.
A burgeoning friendship with singer Big Al Downing resulted in Canyon recording a demo album, Ironwolf, self-released in 1996. Downing set up a recording session in Nashville, as well as arranging to get the younger singer/songwriter's music in front of former RCA executive Freddie May. The demo didn't catch May's attention, but the executive gave Canyon a chance to show him something else. On a 12-string guitar, Canyon played some of his other compositions, including "The Shaft," a song he penned about his family's experiences in Nova Scotia's coal mines. The tune prompted May to arrange for a new recording session in Nashville. The result was Canyon's eponymous debut album, George Canyon, in 1999. "Enough Said," a single from the debut, was co-written by Dana Oglesby, the songwriter behind "Check Yes or No," which was a hit for country star George Strait. Julian Austin, another Canadian singer/songwriter, helped Canyon out by appearing in the music video for the single. Other country artists appeared, too, traveling north for the video shoot. The video found a spot in the Top 20 aired by Country Music Television. Another single from the debut, "Her Everything," was also well received.
Several albums followed, including One Good Friend (2004), Home for Christmas (2005), Somebody Wrote Love (2006), Classics (2007), What I Do (2008), and Better Be Home Soon (2011), all on Universal Canada, and several of them sold well enough to be certified gold. Since starting his solo career, he has represented the Canadian Juvenile Diabetes Foundation as a spokesperson. Canyon himself suffers from the disorder, having been diagnosed with type 1 diabetes at the age of 14.