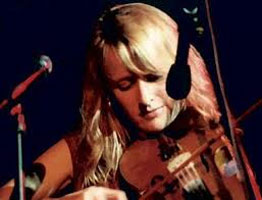 You've got to hand it to Alex Caton. Not only is she a Brit infiltrating the Virginia old-timey music scene, her solo album does it with real panache, taking all the rules and throwing them away. So that means alongside familiar pieces like "Bob Tailed Mule" you'll find an original work like "Hitch to the Altar" (which fits very neatly alongside the traditional tunes) or covers of the Rolling Stones and the Cure -- which don't fit so easily, but somehow still manage to sound just right -- which is very impressive, given that her Cure cover is "Boys Don't Cry." As a fiddler, Caton is an understated player whose work possesses the kind of swing many would kill to have, and her Vocalss don't have any high lonesome pretensions; instead, she sings in a natural way, relaxed and often soothing. In fact, the cuts where she sings work better than when Pat Egan takes over the Vocals chores. But, whether it's strictly old-time or not, Caton has released a quiet corker of a solo disc.