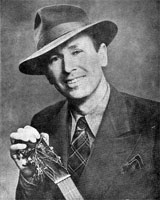 One of the holdovers from the early days of vaudeville shows and one-man bands, Lew Childre managed a successful career during the 1930s and '40s playing radio broadcasts and doing his own advertising transcriptions. Born in Opp, AL, in 1901, he played trombone, trumpet, and drums in high school before being persuaded to attend the University of Alabama by his parents. Childre finished school, but in 1923 joined a tent show as a singer/performer.
He then formed a jazz band called the Alabama Cotton Pickers -- which also included Lawrence Welk -- and recorded several sides before becoming fascinated with country music, then in its commercial infancy. Childre learned to play guitar and then returned to the tent shows until joining broadcast radio in Texas in 1930. After recording several sides for Gannett Records during September 1930, he toured the state with Wiley Walker (later of Wiley & Gene fame) as the Alabama Boys.
Lew Childre moved to New Orleans in 1934, broadcasting over WWL and recording for ARC. He spent the late '30s working the Texas border station XERA with the Carter Family, but moved to West Virginia's Wheeling Jamboree by the early '40s. Childre's talent for ad-libbing comedy and songs made him a natural for advertising, and after he joined the Grand Ole Opry in 1945, he began producing transcriptions for General Foods and Pepsi, among other companies. He recorded an LP for Starday in the mid-'50s, but retired from music in 1959 and died two years later.