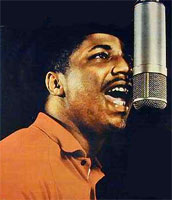 Though largely unknown among contemporary audiences, Dee Clark was one of the most successful R&B singers of the late '50s and early '60s, his resonant, expressive tenor gracing classics like "Raindrops" and "(Hey) Little Girl." Delecta Clark was born in Blytheville, Arkansas on November 7, 1938; from the age of three, he grew up on Chicago's West Side, in 1952 joining with schoolmates Sammy McGrier and Ronnie Strong in the Hambone Kids. A fad that required performers to slap their thighs, chests, and other parts of the body in emulation of what's now known as a Bo Diddley beat, the Hambone Kids were popular long enough for the teenage trio to collaborate with Red Saunders & His Orchestra for a single, also titled "Hambone," issued on Okeh in 1952. The record was a minor hit, but in 1953 Clark moved on, assuming lead duties with the Chicago Vocals group the Goldentones -- when local DJ Herb "The Kool Gent" Kent took over their management, he rechristened his charges the Kool Gents, landing them a recording deal with Chicago's Vee-Jay label. The group issued its debut single "This Is the Night" in early 1956, followed that summer by "I Just Can't Help Myself." (As the Delegates, they also released "The Convention," a novelty record inspired by that year's presidential election.)
After one final Vee-Jay session yielding 1957's "Mother's Son," the label's general manager Ewart Abner convinced Clark to go solo -- his debut "Gloria" was, in fact, a Kool Gents recording, although only Clark's name appeared on the label. He struggled to forge his own style, mimicking Clyde McPhatter on the follow-up "Seven Nights" and aping Little Richard on 1958's "Oh, Little Girl." Neither charted, but when Little Richard himself abruptly quit performing to enter Bible college, his booking agent hired Clark to fulfill his remaining live dates; he ultimately spent five months on the road with Richard's backing band the Upsetters, also enlisting the group for studio dates. Clark officially came into his own with late 1958's "Nobody But You" -- a luminous, uptempo love song ideally matched to his deeply affecting Vocals, the single reached number 21 on the pop charts and number three on the R&B charts, creating the template for the remainder of his Vee-Jay output. Its 1959 follow-up "Just Keep It Up (And See What Happens)" was an even bigger pop hit, reaching the number 18 spot (although going only as high as number nine on the R&B rankings), and with the Bo Diddley-inspired rocker "(Hey) Little Girl" Clark solidified his popularity, reaching number 20 pop and number two R&B during a 15-week run on the charts.
In 1960 Clark notched three more consecutive pop chart entries: the Top 40 hit "How About That," "(Crazy Little Mama) At My Back Door," and "You're Looking Good." The streak continued in 1961 with "Your Friends," which reached number 34 on the national pop charts and proved an even bigger hit in his hometown Chicago market. Inspired by the inclement weather that plagued a road trip back from New York City, the follow-up "Raindrops" was both Clark's biggest hit and his creative apex -- a vividly cinematic virtuoso performance that reached number two on the Billboard pop chart, its sophisticated sound anticipated the R&B genre's coming evolution into soul. But Clark never again recaptured its success either in the studio or on the charts: none of his next three singles -- "Don't Walk Away from Me," 1962's "You Are Like the Wind," and "Dance On, Little Girl" -- even charted. "I'm Going Back to School" was a renaissance of sorts, cracking the R&B Top 20, but in 1963 Clark again stumbled, and after three successive singles ("I'm a Soldier Boy," "How Is He Treating You?" and "Walking My Dog") failing to chart, he left Vee-Jay, signing with Ewart Abner's new label Constellation for the dance record "Crossfire Time," which squeaked onto the Billboard Hot 100 at number 92 -- his final U.S. chart appearance.
Clark's Constellation tenure is a study in frustration -- between 1964 and 1966, he released eight singles for the label, none of which charted. (Some were nevertheless excellent, in particular the Bob Gaudio-penned "Come Closer," "Warm Summer Breeze," and "T.C.B.") In the wake of "Old Fashion Love," issued in mid-1966, Constellation folded and Clark spent the remainder of his career hopscotching from label to label, never again releasing more than one single on any given imprint -- these efforts include 1967's "In These Very Tender Moments" (Columbia), 1968's "Nobody But You" (Wand), 1970s "24 Hours of Loneliness" (Liberty) and the self-explanatory "Raindrops '73," which appeared on the Warner subsidiary Rocky. Throughout this period he lived in almost as many cities, making a living by headlining local lounges and nightclubs during extended stays in Los Angeles, Atlanta, and Orlando. Although 1975's Chelsea label release "Ride a Wild Horse" enjoyed chart success in the U.K., the single was Clark's last -- he continued touring relentlessly during the decade-plus to follow, the grind no doubt contributing greatly to the massive heart attack that ended his life on December 7, 1990 at the age of only 52.