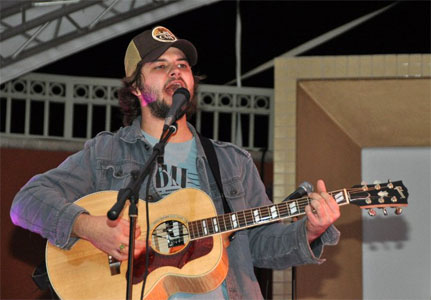 A native of Ellaville, Georgia, Brent Cobb's country songs often celebrate and mythologize rural small-town life. The cousin of Nashville producer Dave Cobb (Shooter Jennings, Sturgill Simpson), Brent made his first bid for success during a short stint in Los Angeles, where he recorded his 2006 debut, No Place Left to Leave, which Dave produced. Not long after, his friend Luke Bryan, a fellow Georgian for whom Cobb had opened some shows, convinced him to relocate to Nashville, where he soon found some success as a Music Row songwriter. He signed a publishing deal with Carnival Music and, by 2011, was landing songs with Bryan, Kellie Pickler, Eli Young Band, Miranda Lambert, and others. He continued to record his own music, releasing a self-titled EP in 2012 and opening shows for Blake Shelton and other high-profile country stars. With his cousin Dave now firmly established in Nashville, the two Cobbs paired up once again to record Brent's sophomore LP, Shine on Rainy Day. Released by Elektra in 2016, the album featured a warm, stripped-down sound evocative of classic artists like Kris Kristofferson and Jesse Winchester.
Shine on Rainy Day earned Brent Cobb a nomination for Best Americana Album in 2018, by which time he'd completed its sequel, Providence Canyon. Working again with his cousin Dave, Cobb crafted a lush record in the spirit of the '70s; the album peaked at two on Billboard's Heatseekers chart.
Cobb left Nashville for his native Georgia after the release of Providence Canyon. A departure from Low Country Sound/Elektra coincided with his departure. He signed to Ol' Buddy Records and hired Brad Cook, a producer best known for his work with indie rockers Bon Iver and Waxahatchee, to record 2020's mellowly adventurous Keep 'Em on They Toes.